As we waited for the Radiation Oncologist to join us in the small exam room and give us his two cents, I pulled up an article from the internet to share with my folks to pass the time and divert our thoughts.  It was the 41st anniversary of the Blizzard of ’73.  April 8th and 9th was being remembered by those in Southeast Iowa who had lived it.  The article was a firsthand account by someone from Centerville and asked for people to leave their own accounts in the comments.  The fourth comment was from a woman detailing how her father left Oskaloosa on Highway 163 for his job at Pella Corporation but never made it.  He was found frozen in the snow the next day.  As I read the comment aloud, I watched my dad carefully.  His mouth opened and his brow furrowed as what I said registered with him.  He was the one who had found that man in the snow, frozen to death, the next morning.

Everyone left for work at their normal time, around 6 am.  It was like a caravan every day, hundreds of people making their way to the factory.  You knew the cars and the people in them, all going to the same place at the same time.  It was snowing when they left and it didn’t get worrisome, well…until they got stuck.  The snow didn’t seem cause for alarm when they departed for their 16 mile commute but that changed fast. Dad had 4 riders with him, as he usually did, and they were intent on getting to work, being there on time and keeping their perfect attendance records intact. This was amazingly important, life-riskingly important, evidently.  Dad recognized the man in the car ahead of him, Stanley, and he’d gotten stuck behind him in the snow one other time on this narrow, tight, sometimes steep two-lane rural highway.  When Dad would come across something precarious in the road such as drifting snow, running water, etc., he would gun it, demanding all power from the engine, and blow through whatever was in his path.  He knew Stanley would slow down.  And he did.  And they got stuck, only a few miles from work, outside of Pella.

They waited in the car for a while. “I was sure a plow would come by. It didn’t.” He intermittently let the car run to warm them up but the snow was getting deeper and he knew they were going to have to keep the motor off so they wouldn’t asphixiate themselves as the snow began to completely envelope the car. The five of them sat in the car about 3 hours before they decided to risk walking in the blizzard.  In that time, the snow went from about 12 inches surrounding the car to 2 feet OVER THE TOP of the car, over the roof.  Dad was responsible for those he carried with him to work every day and he felt it.  He rolled down his window and tunneled out to the top of the snow, several feet straight up.  Everyone else followed. They crossed to the south side of the road, to the fence line where the snow was only about a foot deep. They followed the fence line until they could see a house on the other side of the road.  They crossed back over the highway where the snow was drifting 7 to 8 feet deep and slowly fought their way to the house in the blinding, skin-burning snow.

They knocked on the door.  The owner, a woman, answered and there were already 6 stranded people occupying the house with her. She had just had a baby but the baby was still in the hospital. Her husband had left for work and she was alone…with the exception of all the strangers that she had welcomed into her home with no hesitation.  She cooked them what she had for food and they slept wherever there was space, my dad on the floor.  They were grateful for 4 walls, heat and electricity.

Dad went back out the next morning to look for his car. What he found not 40 yards from the house still brings tears to his eyes; a man frozen to death in the snow. He knew he was dead when he saw him.  He knew there was nothing he could do.  He went back to the house and they called the authorities who sent someone out on a snowmobile pulling a cart. As they freed him from the snow, Dad recognized the man from work, Mr. Johnson. They dug him out, secured him in the cart and Dad watched them take off, the man’s legs and feet sticking straight up towards the sky, frozen in place, forever frozen in time.

Once Dad found Mr. Johnson, he realized that Mr. Johnson’s rider, Mrs. MG was unaccounted for.  He needed to find her, too.  Dad and his own riders had hiked passed Mr. Johnson’s car earlier but didn’t think anyone was in it.  So, Dad and a couple of other stranded men headed back out to where they thought the car was with some brooms, sticks, whatever they could use to probe the snow.  They waded through, and sometimes on top of, the deep snow, repeatedly poking it until they hit Mr. Johnson’s car.  They started digging and sure enough, there was Mrs. MG, still in the car.  She was cold, and according to Dad, maybe a bit lonely, but OK, considering.  They dug her out and escorted her up to the house.  Mrs. MG also happened to be the mother of Stanley, the man who had been ahead of Dad on the way to work and had initially slowed and got stuck.  No one is very far removed in this weekday caravan.

Dad then trudged on to his car which was about 90 yards from the house. It had been buried 2 feet below the top of a drift when he left but the wind had shifted a bit and since blown some of the snow off the top. He managed to spot the antenna and as he got closer, a space about a foot and a half in diameter now revealed the top of his white, 66 Chevy Impala, almost camouflaged by the snow.  He tied a little flag to the top of the antenna so the snow plows could see it. It was still stuck in the road. The interior of the car was now full of snow since they couldn’t roll the window back up after they climbed out. The engine was also full of drifted snow.

Mom was pregnant with me and home with my two brothers. It crossed her mind that she might be raising three kids by herself. Dad caught a ride home after the plows were able to maneuver the snow and the stuck cars.  No big deal.  Back to life, back to work.  They did what they could do and that’s that.   But his eyes still welled up telling me about finding the man. He was helpless to save him. He was also a husband and a father. One walked right back into his life without missing a beat, the other left a family drastically altered forever.

We met with more doctors, starting the day with two appointments and ending it with five.  They confirmed what we already knew, surgery was the only option other than doing nothing.  Our visit consisted of lots of waiting, lots of sitting, punctuated with bouts of information being thrown at us.  The surgeon got an urgent call during our meeting with him, stood up and said “we’ve discussed all of the risks, up to and including death” and made eye contact with each of us.  We nodded.  Dad said he understands the risks, he wants the surgery and if he doesn’t make it, “well, then it’s my time to go”.  Then we’ll see you for surgery.

Mom getting ready to score on Dad. 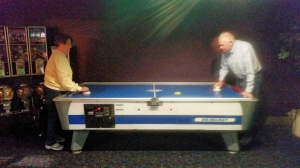 Mom showing us how it’s done.  Me capturing it with a crappy photo. 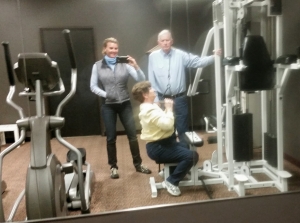 Dad said something funny…but is still suspicious of the phone that takes pictures. 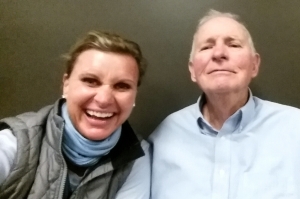 The Barbara Woodward Lips Atrium in front of the fresh flowers changed weekly.  The man paid to stand around, give directions and explain who Mrs. Lips was did not share our sense of humor when asked what kind of events they held in the Hot Lips Atrium. 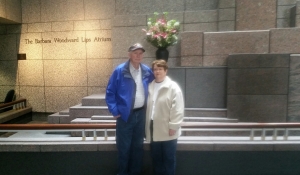 One of the staff took a moment to sing with the piano player in the Subway of the Gonda Building. 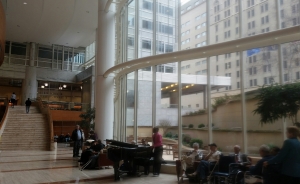 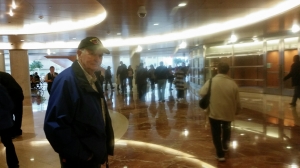 I wonder if Kanye or Bieber will be performing while we’re there? 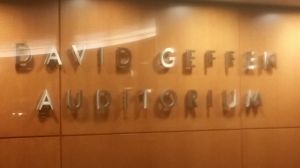 Dad posing next to an Andy Warhol of a gorilla.  A guy walked past and Dad pointed to the picture and said “I’m posing next to my picture.”  The confused man responded by upping his speed. 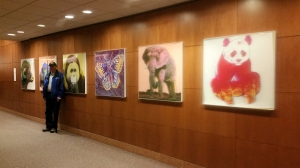 Gonda Guy from the bottom up.  Mom was not impressed. 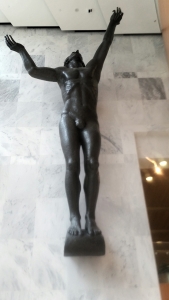