I’d been eyeballing the fair and the weather for a week or so.  I wasn’t sure how I’d feel but decided I wanted to go if I thought I could crutch it.  I was ready to be around people for a while and the weather was in 70s.  Good enough.  Troy took me and we covered most of the grounds at about 2 miles per hour.  It’s the same spectacle it is every year.  It makes me think a giant Walmart flew overhead and poured it’s clientele into the grounds.  Many forms of life and lots of things to make you smirk, question, revolt and flat-out laugh.  Only one guy kicked my crutch out from underneath me.  I caught myself.  I didn’t even beat him with it!  Such restraint.  Five to six hours of crutching just about did my shoulder in.  I couldn’t even lift my arm hard enough to flip a stiff light switch when I was done.

I am the Goat Whisperer. 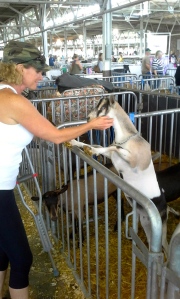 Or maybe they just like me for my tasty crutch.

I came home to this.  Seemed appropriate.

I woke up Sunday feeling surprisingly good.  I anticipated being completely wiped out.  I coerced Steve into picking me up and taking me out for a bike ride….more laps around Water Works Park.  His last ride was the previous weekend.  He crashed on his head during the race warmup due to a pedal coming off mid-stroke.  He then went on to win the 24 Hours of Cumming gravel race.  248 miles of hilly gravel in about 17 hours.  By Tuesday he was at the hospital getting checked out for a concussion.  Yep.  So, his next ride was with me doing easy laps around WWP.  In fact, I did one more than he did!  Technically I lapped him.  He’ll tell you he stopped to stretch out his legs.  Whatever.  I won!!!

The premise of our afternoon sounded like the beginning of a bad joke.  So, a guy with a concussion and a chick that has cancer and is recovering from leg rod surgery go for a bike ride….  What could go wrong? Not too much.  This happened about three laps in.

The last time a bird pooped on me was when I was going through cancer treatment ten years ago.  Right on my head.  This one managed to get both legs.  Don’t let the angle of the picture deceive you.  That crow had a steak dinner and the salad bar buffet the night before.

When Steve and I parted ways on our last couple of laps, I attempted to stand up and give it a little gas.  I got about 100 yards down the road when I hit the next corner and sure enough, a car was coming at me, on my side, not paying any attention.  I screamed at him like my life depended on it.  Because it did.  He perked up at the last second and jerked back onto his side.  There was my interval.  That was the fastest my heart has beat in over a month.  I ended up with 17.3 miles and my leg felt really good the whole time; a little stronger.  It was challenged and the rods were talking to me but it was a noticeable improvement over my first ride.  I even got over 20 mph!

I came home to Cindy cleaning my house and Dave making my bed.  I didn’t even have to trap them!  Dave and his dog, Thomas Jefferson, had come from out of town to visit.  Always good to see my long-time friend.  Once a year visits are no longer acceptable.  Again, the upside to this situation is the people who make time to help you and have fun with you.  I’m not above using this cancer thing to guilt my friends into spending time with me.  I play the Cancer Card early and often.

My back pain has eased a bit in the last few days.  I even picked something up off of the floor…without screaming!  *GRIN* *Pumps fists in the air…ouch….puts left one down but shakes right one, one more time*  I’m not sure what I can attribute it to but I hope the trend continues.  I’m moving a little better overall.  I’m working the areas that I can with a foam roller and coercing people into rubbing various parts while they’re here.  (My mailman now throws my mail at my steps as he sprints by.)  My upper left quadrant is in a dead heat with my rib cage in the Pain Race.  I think I hear my shoulder whimper when I look at the crutch.  The Drunk Turtle is sobering up a bit but don’t worry, she’s still around.

Today is my four week anniversary with my titanium hardware.  I bought it a new razor to celebrate.  I was able to shave clean over the incisions by my knee with no hesitation.

I think I have the market cornered on crappy hospital bathroom selfies. You get what you pay for in this blog.  The extra markings and stickers are for the radiation.  I thought I was becoming an arts and crafts project while laying in the machine.  I still have the tattoos but they wanted some more landmarks.  300 centigray (cGy) a day for ten days.  Today was day 1.

I have upgraded my Weeble Wobble Hobble to a White Girl Gangsta Swagger.  I guess I better practice my gang signs.